Where Morals and Crypto Meet: Marek Olszewski, Co-founder and CTO of cLabs 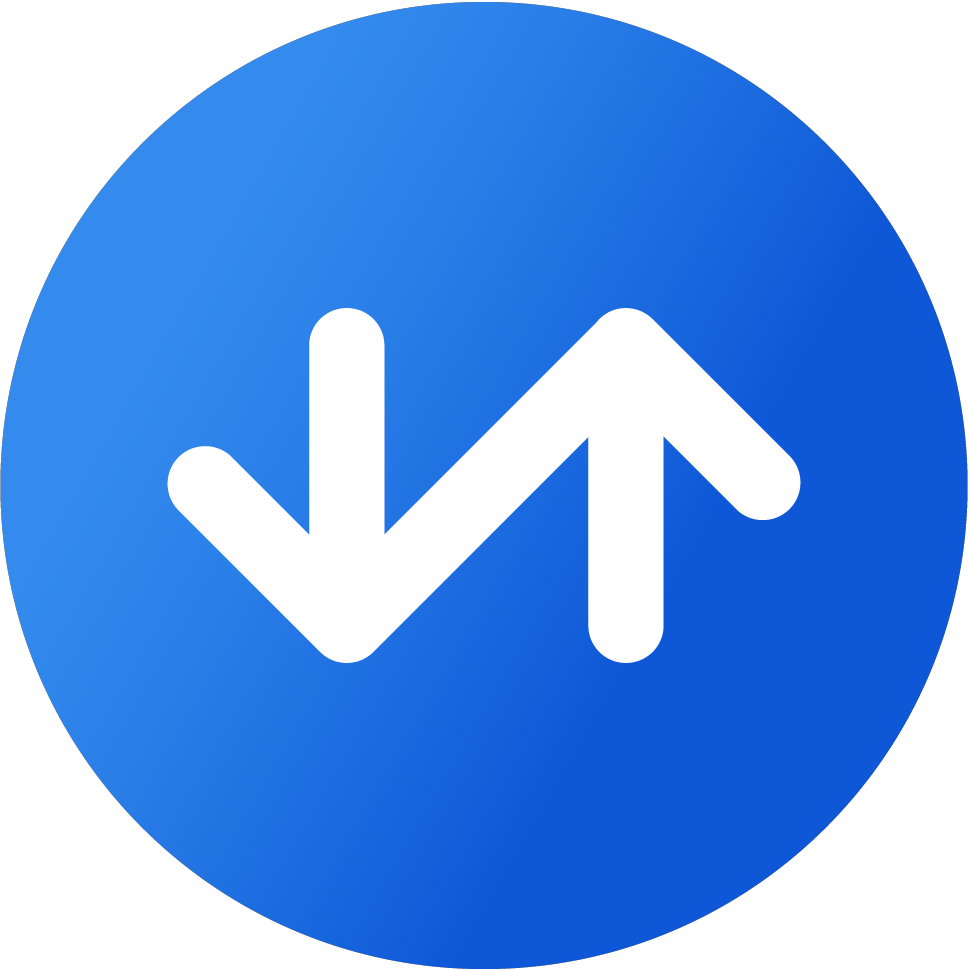 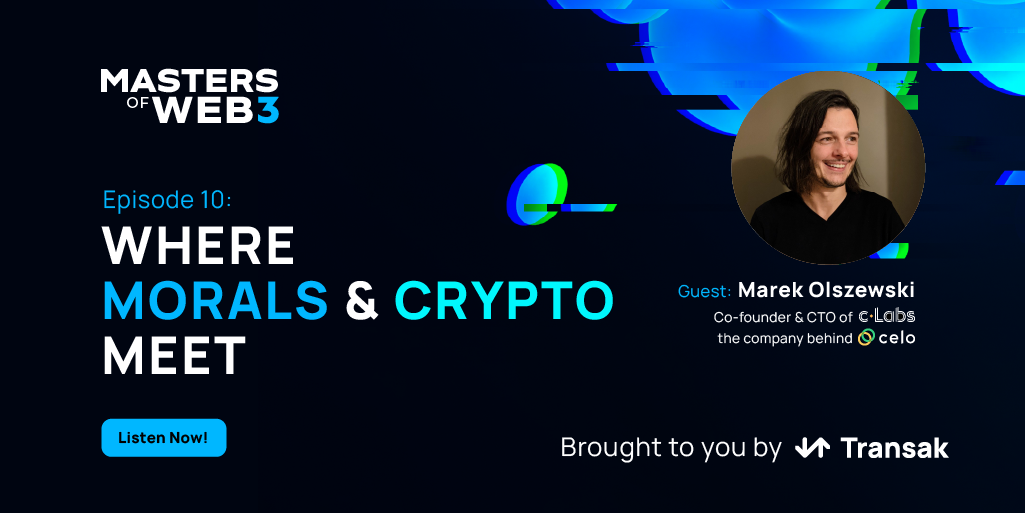 There are not enough hours in the day for Marek Olszewski. As co-founder and CTO of cLabs and president of Valora, Marek, along with partners, is developing a crypto ecosystem (Celo) that is not only profitable but of service to people.

Marek and cLabs are making it easier and cheaper for people to send money with fewer fees at a faster rate.

Join us as we discuss:

The synergy between values and technology

A big part of why Marek and his team wanted to start creating Celo is the international background of the entire team and their families. Marek, whose parents are from Poland, grew up in Singapore and after doing a lot of traveling and studying in other countries, he saw firsthand how financial opportunity is taken for granted in Europe and North America.

Because of today’s financial infrastructure, billions of people face financial exclusion for reasons as common as not having a government-recognized ID. Celo is coming to change that. 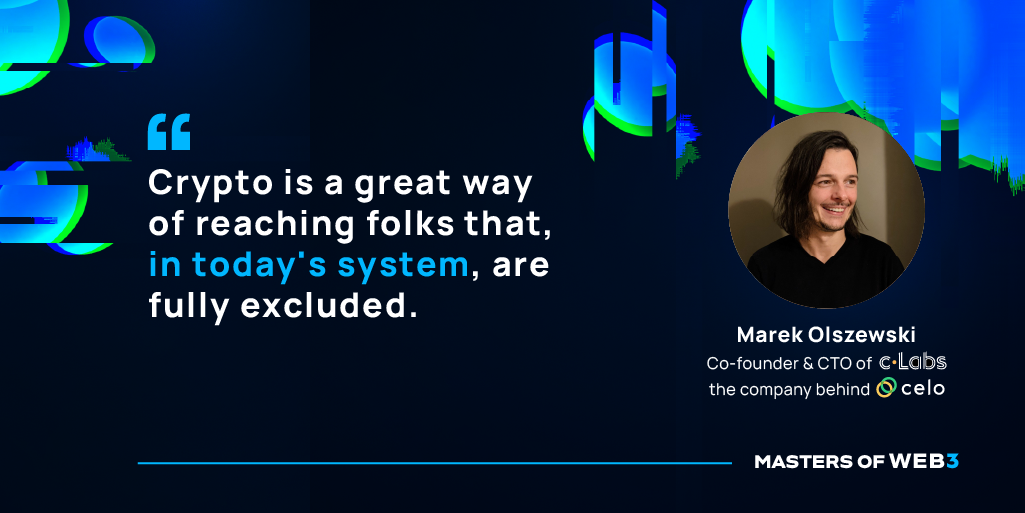 “Crypto is a great way of reaching folks that, in today's system, are fully excluded.” — Marek Olszewski

Marek says it’s more than just finances and wants the highest potential of this crypto ecosystem to shine through, producing only positive externalities.

How Celo’s Layer 1 blockchain differs from others

Celo is a Layer 1 blockchain platform but its usability and accessibility sets it apart from its other Layer 1 competitors. This is to further ensure financial inclusion for all. By being EVM compatible, Celo has access to the most resources for its users who may get stuck and need assistance.

Marek also wants to target mobile device compatibility with Celo and has ingrained features that are relevant to mobile directly in the platform. A big reason for this is privacy concerns pertaining to mobile devices today.

Traditionally, nothing on your phone is entirely encrypted or protected. By decentralizing mobile use, specifically when it comes to finances, Celo is not only making mobile crypto easier to use but safer to use as well. The product offers top-of-the-line proof of stake consensus protocol and new cryptography that allows for zk-SNARK proofs that prove that a header is part of the chain. 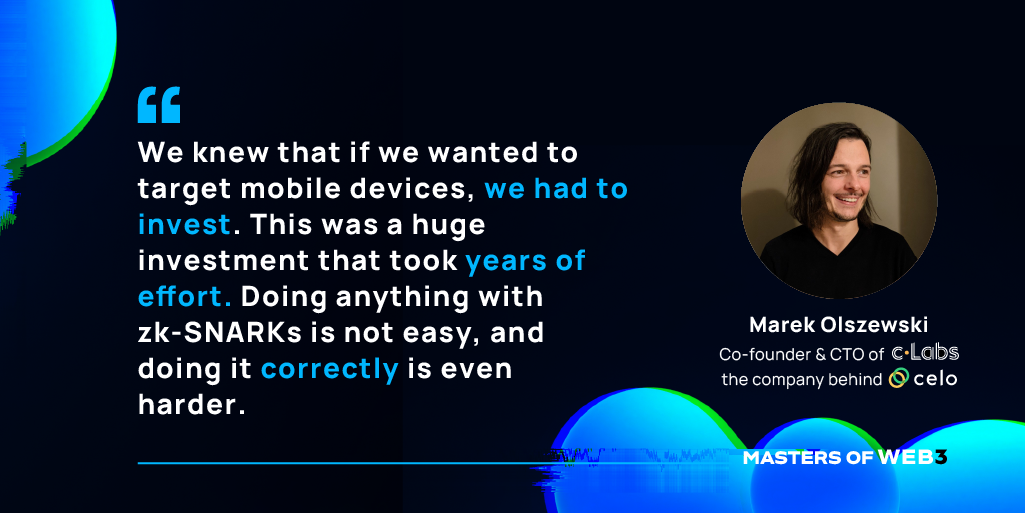 “We knew that if we wanted to target mobile devices, we had to invest. This was a huge investment that took years of effort. Doing anything with zk-SNARKs is not easy, and doing it correctly is even harder.” — Marek Olszewski

There are currently 8 billion mobile devices with active subscriptions, 75% of which are smartphones, so creating Celo as a crypto ecosystem that is mobile-friendly and privacy-backed with an easy-to-grasp user interface will provide financial services to a much wider audience than its predecessors.

Celo’s development of tokens to be used on smartphones

A major key to tying together financial inclusion and mobile accessibility is making Celo compatible with existing mobile devices instead of making users purchase a new smartphone.

To do this, Marek and his team are focusing on crypto developments such as tokens for existing mobile devices. The users and the need already exist within the current smartphone community and Celo aims to build on that.

Celo has a decentralized phone verification protocol that allows users to send and receive funds to peers in their contact lists through their phone numbers. These transactions are paid for using tokens developed by Celo that can be used on your mobile device.

So far, Celo has developed three different tokens, Celo Dollar, Celo Euro and Celo Brazilian Real. These tokens have been allow-listed by on-chain governance and the ease of mobile use is comparable to paying your friends on Venmo.

Marek is hopeful that this token system will only be further built upon and reach a level of collateralization that does more than just transactions but betters the world as well in areas of fighting climate change, universal global inclusion and even voting. 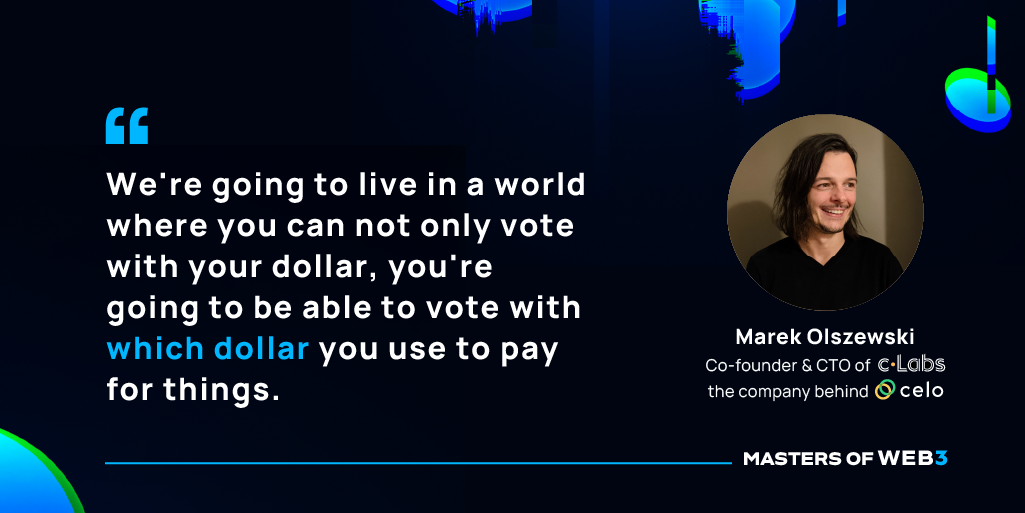 “We're going to live in a world where you can not only vote with your dollar, you're going to be able to vote with which dollar you use to pay for things.” — Marek Olszewski

Want to learn more about Celo and how it's changing the mobile crypto space in a way that’s more than just financial? Listen on Spotify, Apple Music or wherever you find your podcasts.